The framework consists of policy statements that provide guidance for developing candidate project elements such as landside and waterside facilities, vessels and service plans. In addition, a set of evaluation measures defines a range of productivity and efficiency metrics that inform the WETA Board and funding partners regarding a project’s financial feasibility and sustainability.

There is no pre-determined level of evaluation that determines whether a project is feasible. There are many factors that contribute to whether a project is developed and becomes part of the WETA system. Instead, the System Expansion Policy provides policy makers with an agreed-upon framework, bringing objective measures and predictability to the project development process. The System Expansion Policy will be a supporting document to the WETA Strategic Plan as well as future Short Range Transit Plans. 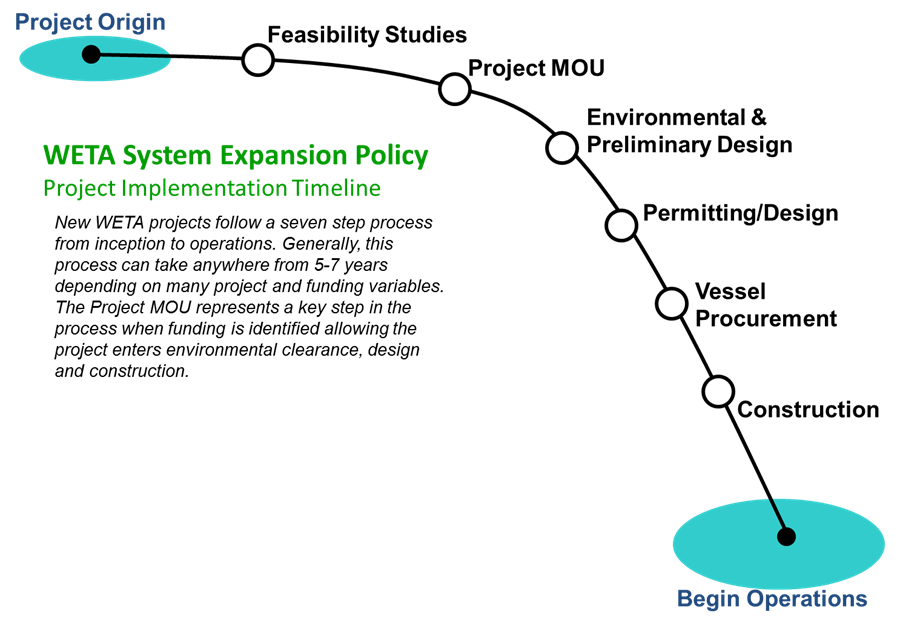 There is up to $15 million in capital funding available through the San Mateo County Transportation Authority (SMCTA) Measure A transportation sales tax program for a Redwood City ferry terminal. However, SMCTA requires a potential project conduct a feasibility study and prepare a business plan to demonstrate that the service can be “cost effective” in order to qualify for funding to conduct project design and environmental review.

The study recommends that all three routes (Oakland - Redwood City, San Francisco - Redwood City, and a combined service) are feasible and to progress to the next step of developing a business plan. The Business Plan is expected to be complete by mid-2021.

New Richmond service would have passengers embark/disembark at a new terminal on the Ford Peninsula in the City of Richmond and at the existing San Francisco Ferry Building. The 2035 projected daily ridership for the Richmond service is 1,715 passenger trips (equals approximately 858 total unique individuals).

There are a number of factors influencing the decision to implement the Richmond to San Francisco ferry service before other potential routes:

The Richmond ferry service will require construction of a ferry terminal facility on the Ford Peninsula in the City of Richmond. The proposed terminal site is approximately 1.5 miles south of the Richmond downtown core, located at the southern point of Ford Peninsula adjacent to the Ford Building along an existing wharf. In general, the proposed new terminal will replace an existing ferry facility consisting of a gangway, float, ramping system and piles. The proposed terminal includes a gangway leading from the plaza adjacent to the existing wharf to a new passenger float that will be able to accommodate one vessel at a time. Ferry passenger parking is planned to for an existing parking lot to the west of the Ford Building. Other project features include an access gate with informational signage and a waiting area at the Craneway Pavilion within the Ford Building. The project includes minor reconfiguration of the existing parking lot and trail improvements in the vicinity.

TIDA intends to work through the Treasure Island Mobility Management Agency (TIMMA) to partner with WETA for day-to-day operation and administration of the service, but WETA is not responsible for any capital or operating costs of the project. TIDA and its developers are responsible for construction of the terminal on Treasure Island, the purchase of the first ferry vessel for the service, as well as a "local match" for any additional ferries that are needed. In addition, TIMMA is underwriting the operating costs necessary to provide the required level of ferry service. The operating costs for this service will be paid for through homeowners' dues, monthly passes for all residents on the new development and other TIMMA operating subsidies.

A minimum level of service of 50 minute headways during regular weekdays is required upon sale of the 50th housing unit. As demand for the ferry service increases with the construction and occupancy of new housing units, TIMMA and WETA will coordinate to increase levels of ferry service accordingly.

Annual ridership on the Berkeley ferry is projected to be just over 203,000 in the first year and increase by 1.78% annually. Although there appears to be strong market demand for this ferry service, the current development patterns and the potential for development around the Berkeley terminal are not as supportive of regional goals for integration of land use and transportation. The Berkeley service has lower potential for walk-up and other multimodal access.

The Berkeley ferry service will require a new Berkeley ferry terminal and associated waterside and landside facilities for berthing ferry boats and to provide access for ferry patrons. The project site is located near the west terminus of University Avenue along Seawall Drive, south of the Berkeley Fishing Pier. The proposed project includes the construction of a new ferry pier between the existing Berkeley Fishing Pier and the Hs Lordships restaurant and includes a gangway that will lead to a new passenger float. The float is expected to accommodate two vessels. The terminal will also require construction of a breakwater and a new navigation channel extending west into the Bay. Proposed landside improvements include reconfiguration of the existing parking facility, roadway improvements, a bus drop area, Bay Trail improvements and landscaping.

The Antioch service was identified in the IOP to provide service to and from downtown San Francisco with an intermediate stop in Martinez. Locally, Antioch ferry service has long been of interest to the City of Antioch and is mentioned in two of the fourteen overarching goals related to expanding transit and providing intermodal transit centers in the "East Contra Costa Action Plan for Routes of Regional Significance" prepared by TRANSPLAN; the sub-regional transportation entity for Eastern Contra Costa County under the Contra Costa Transportation Authority (CCTA).

WETA staff has coordinated with the City of Antioch to identify two alternative sites near downtown Antioch. A site feasibility study was prepared to identify site constraints and design requirements to better understand project feasibility and cost. The recent WETA ridership model update projected a total daily ridership for the Antioch service of less than 445 passenger trips by 2035 (223 unique individuals). Challenges for the Antioch service include long trip times (90 to 120 minutes to Downtown San Francisco) and competition with the Bay Area Rapid Transit (BART) extension to east Contra Costa County (eBART). The eBART project will extend BART to a station at Hillcrest Avenue in the City of Antioch. It is currently under construction with service expected to begin in 2016.

The Antioch ferry project is currently funded through the conceptual design and environmental review phases only. There are no capital or long-term operating fund sources identified to build and operate this project at this time. WETA will continue to coordinate with the City of Antioch, TRANSPLAN and CCTA to explore the feasibility of the Antioch service and to identify funding for construction and long-term operations.

The Hercules service was identified in the IOP to provide service between the City of Hercules and downtown San Francisco. The recent WETA ridership model update projected a total daily ridership for the Hercules service of 565 passenger trips by 2035 (283 unique individuals).The Hercules ferry terminal would be a component of a larger Intermodal Transit Center (ITC) that includes train, bus, bicycle and pedestrian connections. Construction of the ferry terminal component if the ITC would have to occur after construction of the train station component. WETA has coordinated with the City of Hercules to receive regular updates on the ITC project including the environmental review status, current phasing plans, funding and schedule. Funding is in place to construct the initial phases of the ITC. The City of Hercules is continuing to secure funding for the later phases, including the train station.

The Hercules ferry terminal project is currently only funded through the conceptual design and environmental review phases, in part with Contra Costa County Measure J funds. To date, WETA has worked cooperatively with the City of Hercules to prepare the conceptual design and the necessary environmental documents for the new service. A draft Environmental Impact Statement/Environmental Impact Report (EIS/EIR) for the ferry terminal was in process, but was put on hold pending progress on other ITC project components that the terminal depends on. In agreement with the City, WETA is not planning to continue with the environmental review process until the City of Hercules accomplishes the key funding and phasing goals for the ITC. WETA and the City agreed to complete the environmental review when implementation of the ferry component is more certain based on progress with other ITC components. Based on the current funding status and phasing schedule, the ITC project will not advance to such a point that ferry terminal construction could begin until 2017 at the earliest.

Of particular concern for the Hercules site is that construction costs for the project are substantially higher compared to other projects due to large mudflats requiring extensive pier and dredging work to access the site. The anticipated dredging alone would result in both significant capital and ongoing operating costs to the project, posing serious financial challenges for the service.

WETA will continue to coordinate with the City of Hercules, West Contra Costa Transportation Advisory Committee (WCCTAC) and CCTA to explore the feasibility of the Hercules service and to identify additional funding for construction and long-term operations.

The Martinez service was identified in the IOP to provide service between the City of Martinez and downtown San Francisco. The potential terminal would be north of downtown in the Martinez Regional Shoreline Park and adjacent to the Martinez Marina. The recent WETA ridership model update projected a total daily ridership for the Martinez service of 614 passenger trips by 2035 (307 unique individuals). A site feasibility report was prepared to identify site constraints and design requirements to understand project feasibility and cost. The report analyzed two sites along the shoreline of the park. The sites were analyzed to evaluate options for dredge quantities and wave protection. Construction of the project would require a large initial dredge and regular maintenance dredging would also be required resulting in higher capital and operation costs. Other challenges for the Martinez project include a lack of employment and residential density in the immediate vicinity of the proposed terminal, which would be located approximately 0.5 miles north of Downtown Martinez.

The Martinez project is currently funded through the conceptual design and environmental review phases only. There are no capital or long-term operating fund sources identified to build and operate this project at this time.

WETA will continue to coordinate with the City of Martinez, the Regional Transportation Planning Committee for Central Contra Costa County (TRANSPAC) and CCTA to explore the feasibility of the Martinez service and to identify funding for construction and long-term operations.